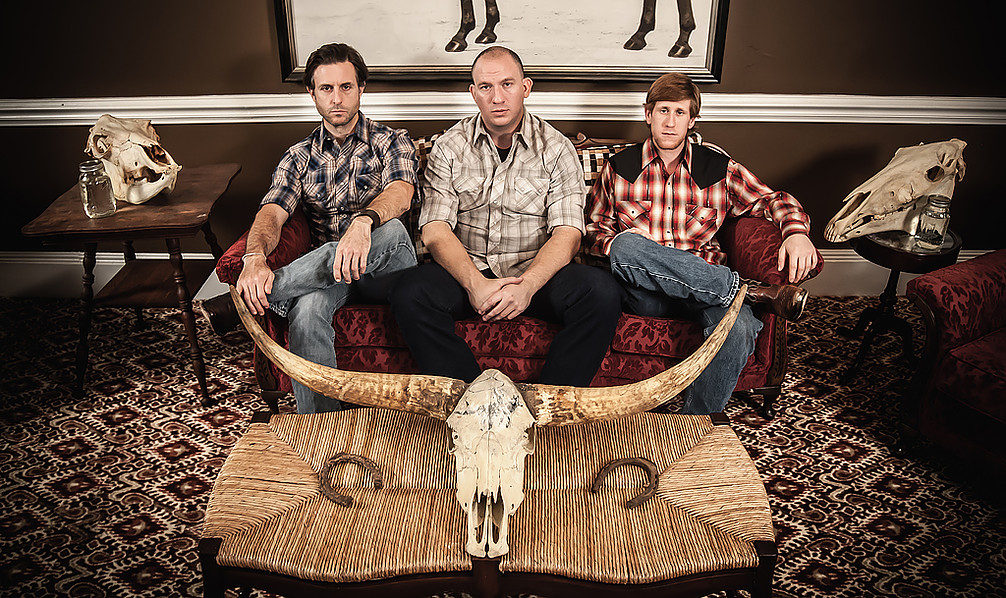 “You want hardcore Power Grass that will drop your jaw and get your heart racing? Grandpa’s Cough Medicine delivers- fresh and dark lyrically, these guys are not scared of exploring unconventional subject matter with their truly unique presentation on acoustic instruments. It’s a thrilling musical ride, going in a whole new direction!” – Larry Keel

“Grandpa’s Cough Medicine is the kind of band that will always put you in a good mood when needed!”
– Hank 3

Blazing tempos, outlaw attitude, foot-stomping intensity, acoustic wizardry. These things all accurately describe Grandpa’s Cough Medicine’s tongue in cheek approach to bluegrass music. Carving out a niche that is all their own, they include humor and dark subject matter in their lyrics, yet are fully capable of letting their musicianship do the talking with instrumental compositions. The trio’s seemingly simple combination of flat-picked guitar, Scruggs style banjo, upright bass and two vocals creates a sound so huge, that it can make a six piece band blush. Their first CD “Jailbird Blues” was lauded in their hometown of Jacksonville, FL as one of the “Top Ten Local Albums of 2011″, and their second album “The Murder Chord” was released in August of 2012 to high acclaim. They were the top-voted music act in 2014’s One Spark festival in Jacksonville, garnering lots of publicity and a check for over $11,500. This money was used to record their third album “180 Proof”, which was released February, 6th 2015 and features guest spots from Jason Carter, Aaron Till, Randy Kohrs, Isaac Corbitt and Hank Williams III. In July of 2015 GCM ventured to Lyons, Colorado to compete in the Rockygrass instrument contests. Brett took 1st place in flat pick guitar and 2nd place for dobro. Mikey won 1st place for banjo.

The founding member of GCM, Brett Bass was inspired to play guitar at age 11 when he heard the guitar solo in Ozzy Osbourne’s “Crazy Train”. He immersed himself into the world of heavy metal electric guitar playing, practicing for hours a day. It was at age 17 that he was bitten by the acoustic bug, hearing how bluegrass pickers were just as fast and technical as his favorite metal players. He began learning how to sing and play Johnny Cash songs, as well as how to pick bluegrass fiddle tunes. The first songs he ever wrote (Many of which are on “Jailbird Blues”) came out in the country/bluegrass style, so he ran with it. The playing of his favorite bluegrass flat pickers, such as: Doc Watson, Bryan Sutton and Larry Keel became his new guitar inspiration, absorbing their styles through albums and instructional DVDs. His songwriting reflects the influence of the decidedly darker subject matter found in heavy metal music. Brett is the 2015 Rockygrass flat pick guitar champion.

Mike Coker had a revelation at age 11, when he heard banjo legend Earl Scruggs playing the theme to “The Beverly Hillbillies” on TV. He told his father that day, that he wanted to play the banjo. He received his first 5-string and began taking lessons in traditional, Scruggs style banjo. He played in a youth band for several years and fatefully ran into Brett one day at a bluegrass jam. They began jamming, collaborating and writing songs, until he was brought into the band. Mikey’s stellar playing and youth earned him the nickname “Banjo Boy” and his presence in the band greatly influenced GCM’s playing, causing them to go faster than ever before. He is also the 2015 Rockygrass banjo champion.

Jon Murphy graduated from the University of Arizona, with a minor in music. His musical experience includes playing cello as a teenager, singing in the Arizona Opera Chorus, playing guitar and bass in several different types of bands and he’s released a solo folk album independently. One day he answered a craigslist ad that said “Outlaw country band seeking members” and after one practice, joined GCM. Originally he played electric bass. As the band started heading more and more towards bluegrass, he bought an upright and taught himself to play it. He has put the time and dedication into being a rock solid bluegrass bassist, singer and songwriter.

Mariah Bell with the guitar she received from ICE.

OLD GRASS, NEW GRASS, BAYGRASS BLUEGRASS!!!! The BAYGRASS BLUEGRASS Festival is less than 1 week away 3 bands 3 days! One of many great events produced by ICE here in Islamorada.
http://www.baygrassbluegrass.com/

OLD GRASS, NEW GRASS, BAYGRASS BLUEGRASS!!!! The BAYGRASS BLUEGRASS Festival is less than 2 weeks away 3 bands 3 days! One of many great events produced by ICE here in Islamorada.
http://www.baygrassbluegrass.com/